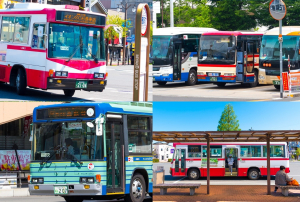 Isuzu 810 (read “Hatten”,meaning like growthing ) is a large truck manufactured by Isuzu in the 1980s. So-called cab-over type (type with engine under the driver’s seat. It is contrasted with the bonnet type. It is the second generation as isuzu car, active vehicles are considerably less.

In fact, in my 20s now, I’ve only seen it running once or twice at most. It is a super valuable track that I do not see easily still even if it is from countryside.

I was in definition!

When I went to Joge(=jogi),in Sendai,Miyagi,in Japan by car around this spring, I witnessed the active 810 parked.

Since then, I thought, “I want to see this as close as possible!”.

The other day, I had a sufficient time, so I visit .

I didn’t remember the place well, but it should probably be the map above. For the time being, I decided to take the route bus to the definition of sendai municipal bus and get off when it gets close.

After taking picture of bus at Kumagane Bridge as planned…

Now that time has been spent, I decided to walk towards the defined mountain for a while.

The idyllic scenery spreads out.

Even this, there is Aoba-ku, Sendai City.

There is often news like “Bear infested in Aoba-ku, Sendai City!”, but it is a story around here. (It’s not like in central Sendai city!)

According to a friend who used to live around here, he often heard that somebody shouting “The bear came out!” and then “Pan! Pan!” (shooting sound)

After walking to the “Otemon Entrance” bus stop, the definition line from Sendai Station at 13:00 arrived.

Unusually, there are only three passengers, including me. The en d bus stop of this line is a tourist spot famous for flied “aburaage”, and it is usually crowded with tourists, but is it the influence of COVID-19 ?

The loads around there are very small !

The bus went to Okura Dam.

We will go to the other side through the top of Okura Dam.

This is a super narrow road where there is only one large bus width. If you match it with a passenger car, there is no choice but to back either.

On this day, a Jeep didn’t notice the bus, and came in from the other side. He had to back to the separated zone.

Rock shed is so small, too!!

After this, okura ohashi bridge should pass usually, but it seems that it is closed to traffic with construction now. It has been a detour service.

Okura Ohashi bridge is such a place ↓

This is also the width of a large bus.

Sendai municipal bus vehicles are basically not equipped with a back camera, but the vehicle of the Shirasawa sales office in charge of the definition line is properly equipped. It seems to be prepared when the back is needed by any emergency, in Joge line. It is said that it used to operate with two people with monitoring personnel, but this narrow degree is convincing.

In addition, in winter, you can enter the car wash machine with the customer on, there is a driver change on the way, and there are many exciting points, but this time it is not an introduction of the definition line, so let’s do this.

At this time, I did not notice it because I had not confirmed the satellite photo yet, but there was a considerable distance from the definition to the destination. I really wish I had got off earlier, but somehow I came to the end point …

I can’t help it, so I’ll walk down from here.

However, it seems that this was a failure after all.

Rain that began to fall.

If you look around, there are a lot of hornet carcasses (;,∀?)

Recently, anaphylaxis shock has become a hot topic in COVID-19 vaccines, but in fact, insects, or bee stings, are surprisingly common causes other than food allergies. There are deaths in Japan every year, and some people who are likely to be stung by forestry etc. are prescribed EpiPens (injections that can be struck by them themself when they are shocked) in advance. I’m a little bit attracted because I know such stories.

If you notice, asinagabachi and kumanbachi flying around me. If you look in front of you, there is a hornet on the street!

We finally got there!

It is 30 minutes to walk in the heavy rain while being frightened by the bee.

After all, there was!

The fact is that there is active ISUZU 810 !

Isuzu 810 of special specifications equipped with deep dump and forestry crane. It’s one smaller than the current heavy truck, but it’s still overwhelming when you look close.

And a surprise clearance!

The driver’s seat is insanely expensive! It’s like Mercedes-Benz UNIMOG or ZETROS !

If you have this clearance, you will be possible to run usually if it is about 1m deep.

In fact, the special 810 seems to be still used by some units of the Ground Self-Defense Force. This is okay even at disaster sites. The strength of the off-road is likely to be inked.

And the nostalgic Isuzu emblem and round headlights

The red mark under the ISUZU emblem is the Isuzu logo. It is a mark that was equipped until about U-10s, but it disappeared before I d know it. It should have been on not only the track, but also the early cubic, journey, and super cruiser handles.

I can not say anything because it is a special wear type, but when I look at the round headlamp, I think that it is probably an initial type that is rare among 810. The five characters of ISUZU are also rounded fonts, not the current angular fonts, so there is a high possibility of initial types.

The rear is equipped with a forestry crane.

I checked it after I got home, but I didn’t know the manufacturer or model. Because it is new compared to the vehicle, it is likely to have been replaced after or near. At the top is “MARUMA”, which seems to be the name of the importing company. This type of crane is mostly made overseas, so I don’t think it’s UNIC or something like that. It is often a manufacturer that does not know.

And surprisingly this 810 license plate.

Even though it’s so old, it’s sendai number!

It is not a vehicle that has been there for a long time, but it is likely to have purchased a second-hand somewhere recently. Is it because the crane was installed at that time that the crane was new?

However, sendai number on this track, unbelievable!

After seeing the 810, I decided to walk towards Okura Dam.

As mentioned at the beginning of this article, Okura Ohashi Bridge is currently closed to traffic for repair work.

Instead, there are buses for Okura Ohashi Bridge and Okura Furusato Center. It was pulled out by Hiace of the agency bus on the way.

As I walked, I saw Okura Elementary School, which closed last year.

Okura Elementary School was the only elementary school in the area, but it closed in 2020 as the number of children was low. It seems to be as it is now.

147 years since its founding is amazing!

I think that it is rare to exceed 100 years even in a school that is said to be a traditional school. I guess it was passed down from generation to generation by the local people.

On the way back, I got on from the lakeside park bus stop near Okura Elementary School.

Above, it was a report when I visited the active Isuzu 810 and went to the definition.

The Isuzu 810, which is now active in 2021, should be quite valuable. Even in the Tohoku region, where many relatively old vehicles run, it has rarely been seen.

Moreover, there were only specifications that looked at the initial special body model, Sendai number equipment, forestry crane equipment, and all of them. I was very grateful to see it.

In addition, it seems that the owning company of this vehicle is still used carefully. When you look at it, be careful about safety and don’t be rude ~ ♪